Luke suggested that I write about my ever-increasing pre-occupation with painting my skin at gigs. I suppose if this post reveals anything about my personality (aside from my child-like hunger for attention) it's how little encouragement I need to push something to the extreme.

It started with The Missing Lincolns set at Corinbank 2010. Luke was living in Cairns at the time so it was our first show in almost a year. Between that and the opportunity to play a big festival stage, I became obsessed with laying on some kind of arresting spectacle.

Without telling the other guys, I devised a fairly random costume concept, inspired by the character King Peacock from Alan Moore's 'Top Ten' series. A phone call to Mum and a visit to Lincraft and my outfit quickly took shape. I can still remember the look on Luke's face when, minutes before we took the stage, I threw a jar of yellow paint at Gleeson (our tirelessly dependable drummer) and asked him to rub me down. Gleeson took it in stride. 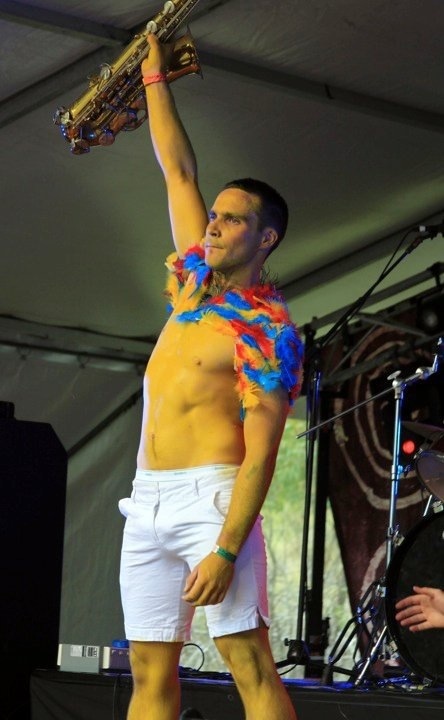 It's funny to think of now, but I was terrified. I'd never been shirtless in public before! That said, it was the day that I discovered the freedom of extreme costuming. I wasn't just Nick anymore- I was King Lincoln, Harbringer Of The Sun, and the only logical behaviour was to rule the stage like a king.

It was a few months after that The Last Prom started to take shape as a band/theatre project. Once I realised I was going to be performing as the Antichrist fronting The Four Horseman Of The Apocalypse, the door was opened for some fairly 'statement-y' looks.

2012 involved a full theatrical season of Last Prom shows, along with a resurgence of The Missing Lincolns in the wake of Luke's return. People were still talking about the Corinbank show, so to my mind there was no room to go backwards as far as on-stage presentation. 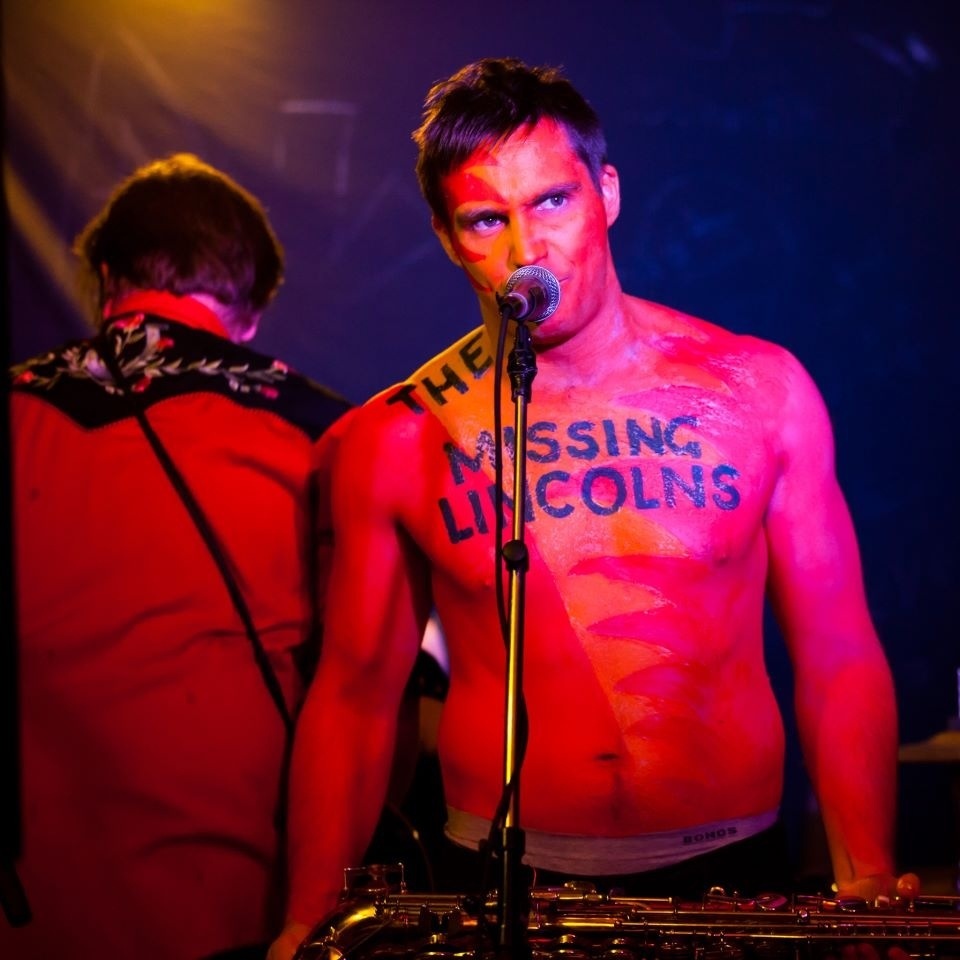 Bodypaint has largely given way to coloured hairspray, which has proven to be a quicker process both in application and removal. With so many gigs and promotional shoots, it felt like I spent half of last year either painted or washing paint off. Many was the time I'd be halfway through a workday and have a client point out where I'd missed a spot.

Expect me to take things to an even more ludicrous extreme in 2013, and not just in the bodypaint stakes. I'd like to finish with a shout out to the talented visual artists who have stooped to working with the blank canvas that is myself, particularly Julia Johnson and George Edwards. For more of their work, watch this face! 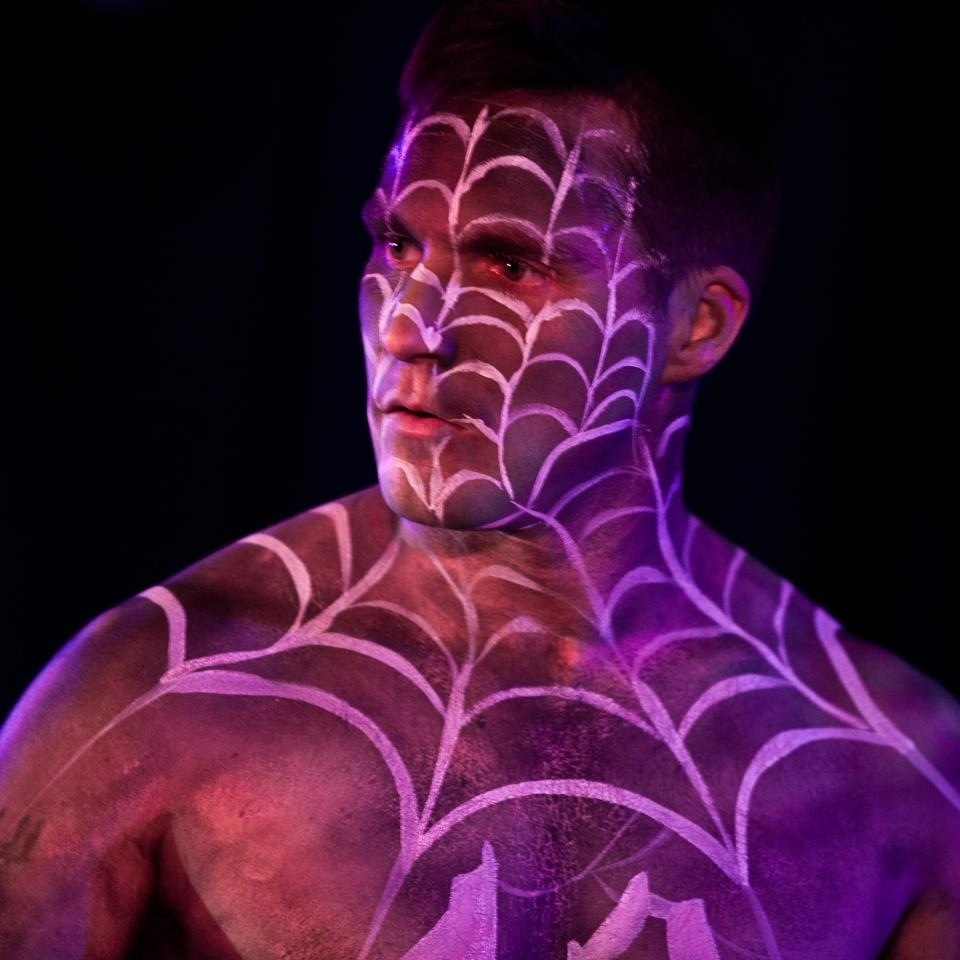 After falling in love with Holy Motors last year, I’ve plunged into Leos Carax’s filmography.  Today I watched Mauvais Sang, and was struck by the similarity between this frame and one of our own.

Porcelain skin, white light, a splash of blue, bokeh on black, a sense of stillness.  Mauvais Sang is superb and I highly recommend it. 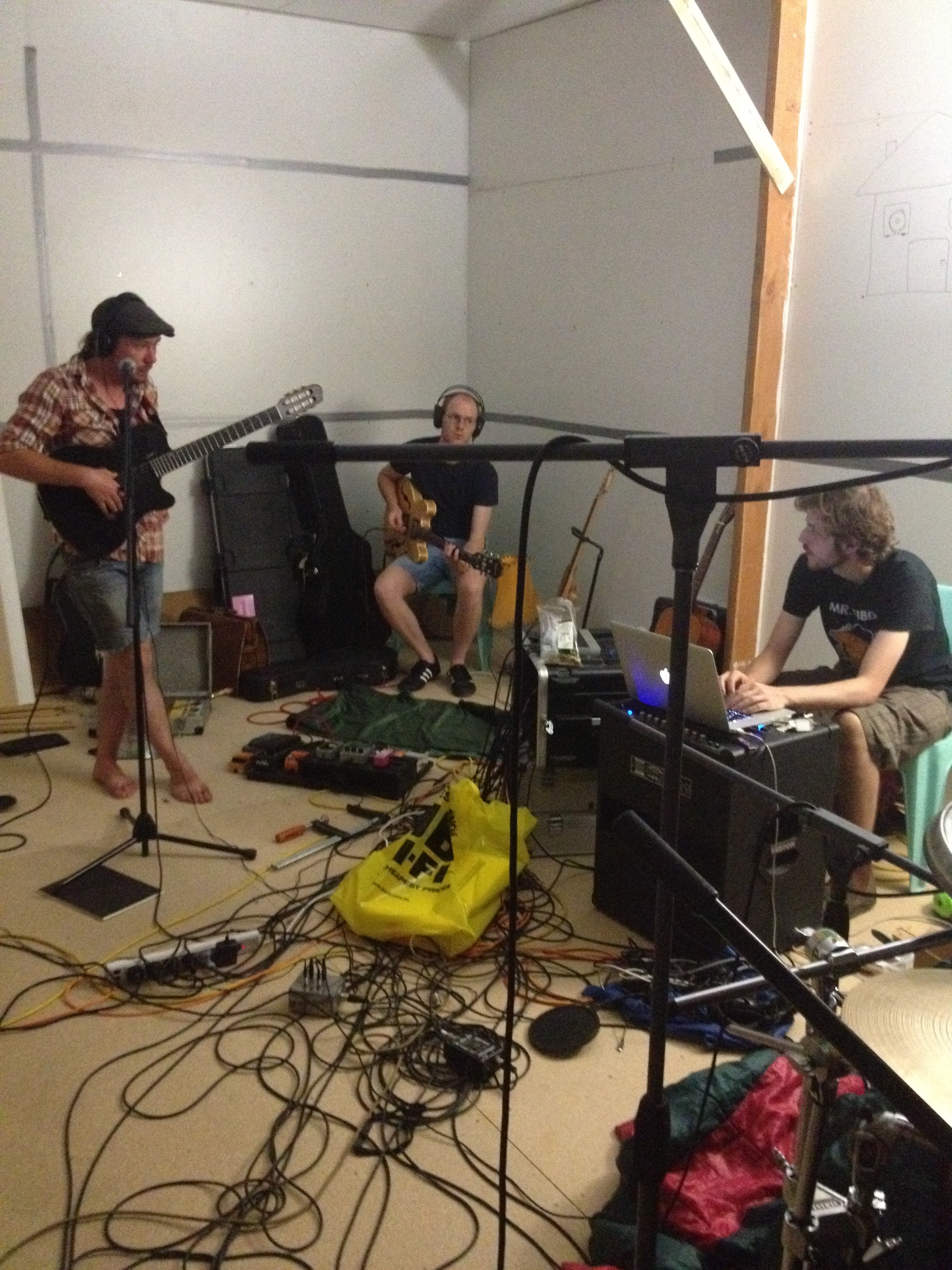 Happy New Year Everybody! I was sure to have a slothful festive season, as this year is shaping up to be the busiest of my entire life, both professionally and creatively. First off the rank was five days in the studio with Cracked Actor, tracking our new full-length record.

Cracked Actor is the only band I play in where I don't contribute songs. My beautiful friend Seb is the song-writer and frontman, and his pensive art rock is a bracing contrast to the red-meat-indie-pop I usually trade in. 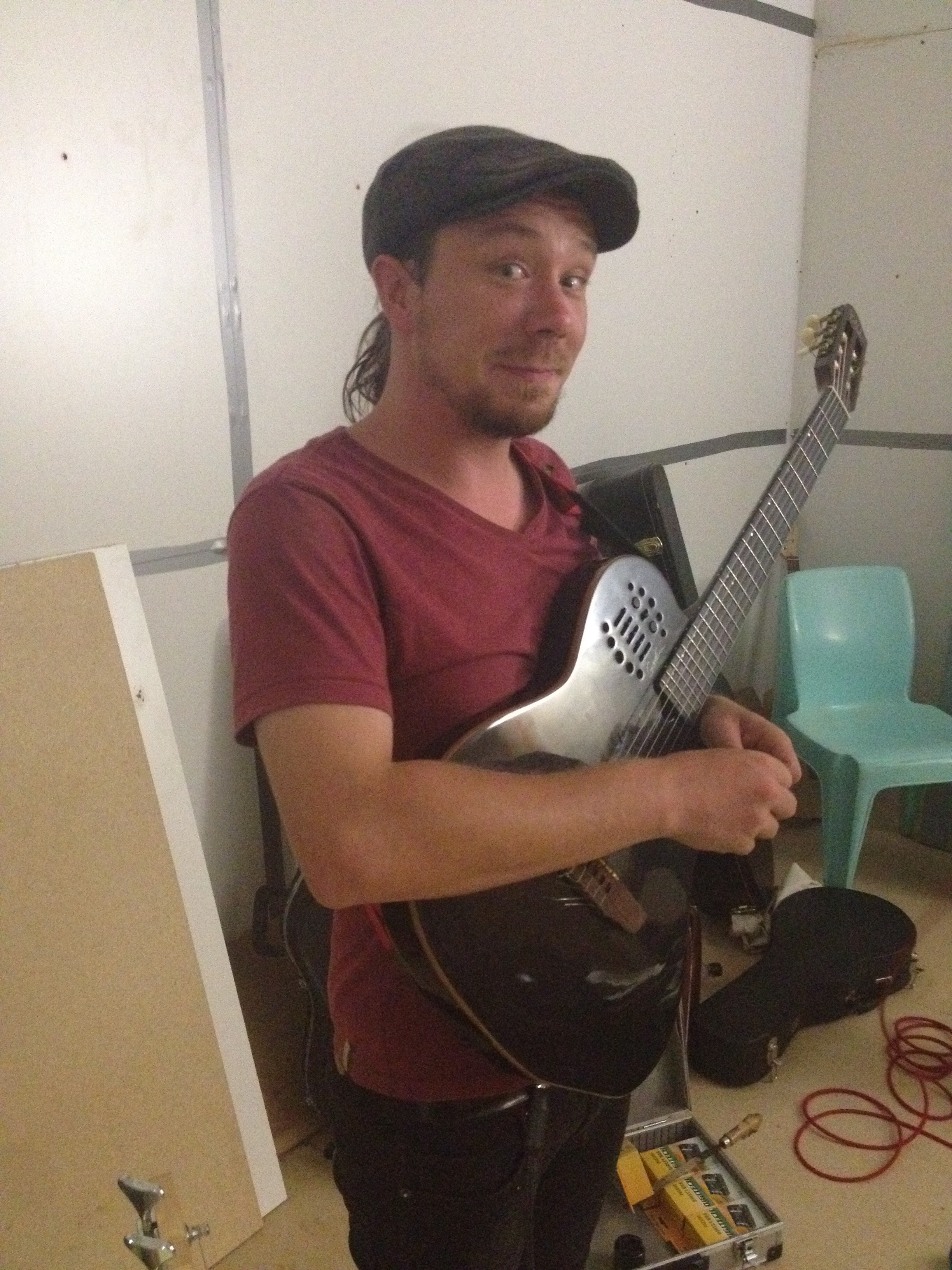 Seb brings a meticulous sonic vision to the band, and the quality of his song writing has turned me into a faithful solider. Seeing him construct his tracks from a latticework of guitar and vocal overdubs left me somewhat intimidated by the knowledge that he'd been carrying the whole picture around in his head for months. 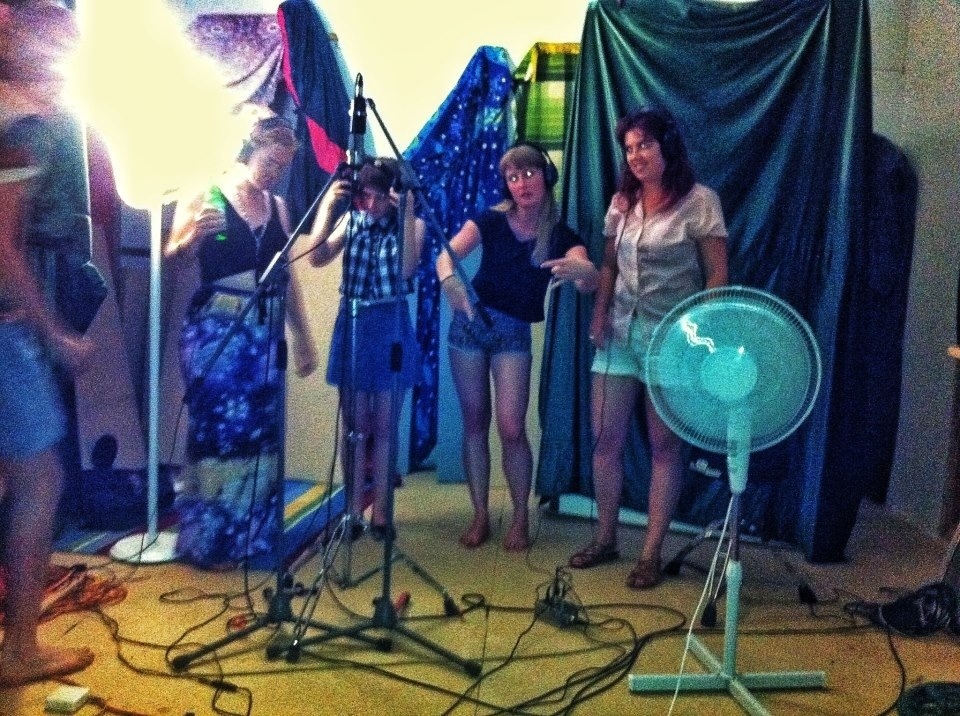 We'd originally done 5 days of pre-production and arrangement work in July (the grandparents of our guitarist, Jordan, let us use their house in Ulla Dulla. Shout outs!) and I realise know how much time it saves you in the studio. It's an approach I'll definitely rip off for my other bands in the future. 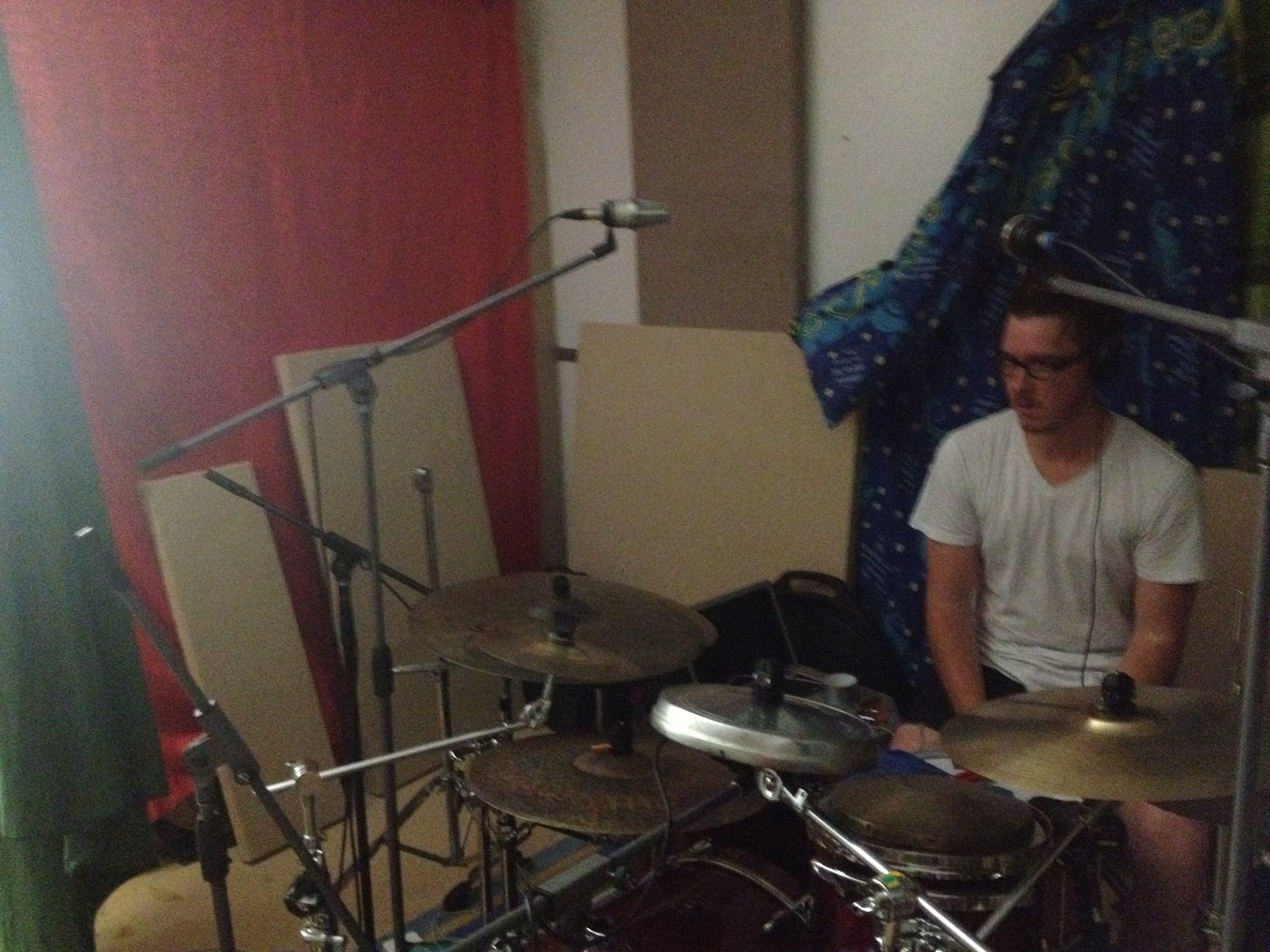 The most exciting part is that we were first cab off the rank at Sam King's brand new studio, I Am Merloc. So new, in fact, that it isn't even finished! Sam, if you're reading this I'm sorry for showing the place in it's bare condition. Suffice to say that it already has the most exciting room sound in the city limits. Here's to 2013, the year of new recordings!

Phase One of Operation: El Lukio Freedom has kicked off – I posed at the Fyshwick Fresh Food Markets for our good friend and photographer Tiffany Smith.  Contrary to what I expected, no one cared that a guy in a pink wrestling mask was running around manhandling the produce.  I even went through the checkout and the cashier didn’t raise an eyebrow.

I also pre-wrote 130 tweets today.  Which sounds odd, but it’s the only way I could do it (especially sans smartphone).  I’ll let them trickle out (if you’re curious, follow us, or find us on FB), but will collate some of the best here in a couple of months.  There’s a mixture of content, from actual cooking tips, to food-related song links, to zingers.  It was fun to write gags in such a truncated format – it’ll be a good way to hone my comedic skills.

The inaugural Shine Tarts rehearsal took place tonight – we were down two members, but still had a core crew (which can only happen when you have a six-piece band).  My doubts were washed away almost immediately – the songs are not complicated, but I was still impressed with how effortlessly everybody picked them up, and how quickly it sounded like a band.  This is going to be amazing.

We ran the entire set, and while there were a few standouts, everything sounded good.  I also got a sense for the sound of the actual band, as a separate entity, discrete from the idea of it in my head.  It’s funkier than I imagined, a bit tougher, and jammier.  Which is all great.

There’s plenty of tweaking to be done, and I’m anticpating some drama synching to the film.  But right now, I’m psyched, and very pleased with my choice in bandmates.

Over the last couple of days, we filmed and edited “ The Public Service Announcement”.  It’s a long-gestating idea, suggested by my focus group/work colleagues (who all vociferously use hand sanitizer several times a day).  It took some time to find a way in – I didn’t want to do a bland direct to camera monologue, and eventually found inspiration in Mr. T’s PSAs and raps, intended to “reach the kids”.

In these irony-drenched postmodern times, the cringe factor is almost unbearable.  We tried to capture its tone, to keep it as sweet and sincere as possible.  If ours has its share of irony, it’s only what the viewer brings to it – on face value, it’s just as genuine and heartfelt.

For our shortest video, there’s several firsts.  In particular, we experimented with green screen effects – I wouldn’t say completely successfully, but we learnt a lot.  If we can bring down the amount of time they added to the shoot, I’d like them to become a regular fixture.

We’re taking a short break from filming, and exploring some promo opportunities (a photo shoot, vinyl stickers, a live cooking demonstration, as well as further “online penetration”).  I’ll also use this time to script the next two episodes in conjunction, allowing us to set-up gags in one episode that pay off in the next (which we do now, but the possibilities are greater with a little premeditation.  There’s times we’ve thought, “if only we had this extra bit with a guest chef” or the like).

Things have happened quickly since I last posted about Sunshine Sally.  Then, I was 70% happy with the demos – that figure’s now hovering around 90%.  I’ve trimmed two songs, bringing the total to 12.  I’ve also re-recorded some of the demos, swapping out my vocal placeholders for the melodies on guitar or keyboard.  Sonically, it’s now consistent. 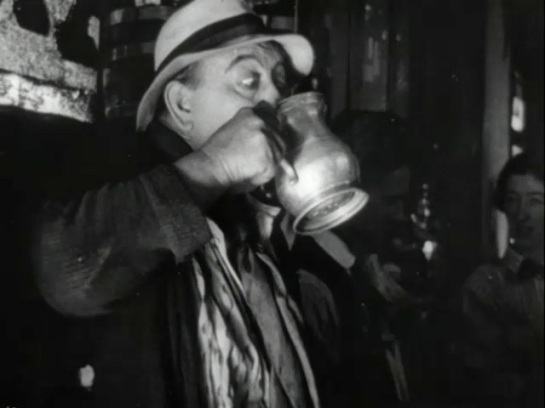 It’s definitely a soundtrack by a pop musician – there’s no swelling orchestral arrangements or avant-garde electronic flourishes.  The closest comparison I could make is to Badly Drawn Boy’s About A Boy soundtrack -wistfully upbeat, acoustic-driven pop, with a mix of vocal and instrumental tracks.

The band will be billed as ‘SHINE TARTS’ – it’s an ocker term from the movie (not actually in my edit), meaning a ‘good sort‘ or ‘top bird’ or the like.  We start rehearsals this week.  Part of the challenge I set myself was to work with people I’ve never played with before.  It’s an eclectic group, and I can’t wait to get in the room and see what we can cook up.