Cell Block 69 are an entertainment tsunami that cut an unforgiving swathe of glam brilliantness across Canberra and Sydney every Christmas. Their frontlord Duanne LeCorey Michaels was the actual writer of every truly great song of the 80s, and he peppers their breathtaking live gigs with the heartwrenching backstory of how each song was systematically stolen from him. The magnitude of their fantastitude is such that the world only deserves to witness it once a year, but this year the magnanimous 9-piece have devised a whole new format to gift to their obsessive fans.

The first-ever Cell Block 69 Dance-off took place a few weeks ago, and competitive dance-fighters from all over the ACT fronted up in an attempt to win the hearts of the judges and the crowd. 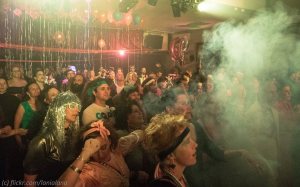 Off course my dance-rogue-from-the-wrong-side-of-the-tracks alter-ego Nicholas Dare received a special invitation to compete, despite his history of insanely risky stage behavior and general reputation for hard-living. His crowd-entrancing performnace was captured in the above video. Dare fell short of the championship trophy but he went the distance, surviving a routine that threatened to end both his dance-off career and his life. Follow the youtube links to see the other, equally dazzling routines that made up the night.

The audio version of my latest #epinaday session has dropped, under the name Swim Out, Swim Out. I was invited to put a couple of sets together for the ACT Poetry Slam finals and I thought it would be a good opportunity to do a low-key launch for the record. I ended up doing a two-night engagement that also included a show at Transit Bar alongside my fellow Cracked Actors Seb and Matt, who did a lovely duo set, and The Blade Winner, Canberra’s King of the support-act-who-outshines-the-headliners.

My ‘band’ consisted of Merloc Studios power couple Sam King and Emma Kelly. It’s actually been a long-held dream to play with those guys as a three piece, and the reality was even better. But don’t tell them I said that.