It’s close to a year since I started drumming. I’m happy to say I love it now more than ever. I still have weekly lessons with Sensei Simon, and the songs I have been writing for Lulu and the Tantrums, and now The Ill Feathers – my funk duo with Fossil Rabbit, push me to play increasingly challenging parts. 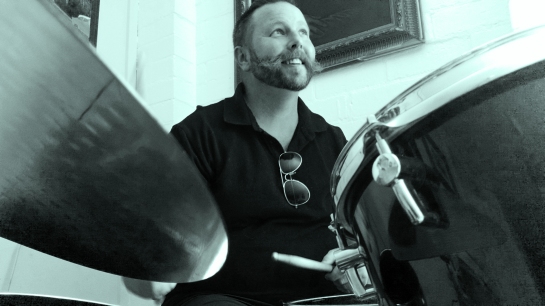 For me, guitar is a means to an end – I learnt guitar so I could write songs, not because I wanted to be Jimi Hendrix. But drums is the first instrument I’ve ever wanted to be good at. Drums is the instrument that’s made me want to study the greats and see how they approached it, their techniques and idiosyncrasies. I am a drum nerd now! I want to talk about Gadson’s right hand, or Stubblefield’s left, about how Bill Ward’s jazz background informed the heavy grooves he brought to Black Sabbath. Hell, can we just talk about triplets – like, how good are triplets??? And where else can I put them?

Developing the small muscles used in drumming – wrists and ankles – takes time and discipline. I have some stamina and coordination now but it’s like going to the gym – you won’t see results overnight, or in a week or month. You gotta keep showing up, doing your reps, and from time to time you can look back and see the progress you’ve made. There are things I attempted to learn when I first set out and found inconceivable – now I can do them!

But drums are humbling, and this desire to try something I have no immediate aptitude for, to go into it knowing how long it might take, well, Nick has plenty of things to say about that kinda quest in Single Leg, too.

I have the same goal as when I started – to be Russell Simins, and bring hard-hitting soul and funk beats into a garage rock context. But as I progress, I hope to build enough vocabulary to play along to most things. Drums is not an instrument people learn so they can just play alone – it’s communal, and largely only makes sense when accompanying others. Being a hired gun and playing in someone else’s band is a milestone I want to achieve, but unlike most, it’s not my primary motivation.

Instead, while Nick’s talked about his increasing willingness to delegate and collaborate – some unnameable drive keeps pushing me in the other direction. Others – Lou, for instance – have suggested it’s the pursuit of complete creative control. But the more I reflect on it, I think it comes from a different place. I think learning drums is part of my yen to understand popular music from the inside out. I am obsessed with the nuts and bolts of creative practice, I enjoy learning how things are made, frequently as much as I enjoy the finished product. I love ‘inside baseball’ – I’ve read nearly every interview on The Paris Review, listened to every Song Exploder – but you never truly know something until you do it. And done remains the engine of more.

I figure it’ll take two more years to feel comfortable. I tend to do these autodidactic sprints in three year bursts – screenwriting, film directing and editing, music production, you could even consider Faux Faux Amis to be one as well, a challenge to myself to be perform lead vocals and guitar in a quote unquote proper rock band. At some point I reach a stage I’m happy with, and then find myself hooking into something else with the same slavish devotion. But I have a feeling I will be working on (and loving) the drums for some time.

And clock the bass drum! It’s not Purdie’s banners, but it’s a nice flourish. I know from Chris Gleeson – one of my oldest friends and musical collaborators – that being a drummer frequently means not rating a mention in a review or being obscured by everyone else in a gig photo, so I guess in this way at least my trap set will get noticed! The image is by the brilliant pop-culture-obsessed Jess Dudfield – I asked her to do a stylised cartoon version of the cover of Faux Faux Amis’ X. A sloth in a bowtie – slow but fancy – speaks to me a lot!