Cathy Petocz is one of those artists who executes work with precision and clarity. More importantly, her stuff is always great. When Cathy offered me a one-scene role in Vinegar Tom, Caryl Churchill’s famously witch-less play about witch trials, I made room in my schedule.

Cathy directed Tom as the first production by COUP: Canberra, an art and performance collective that’s she’s started with Hannah De Feyter and Becki Whitton. They’ll be making some of the best art in Canberra in the next few years, and I’m smug that I’ll be able to say I was in their first show. 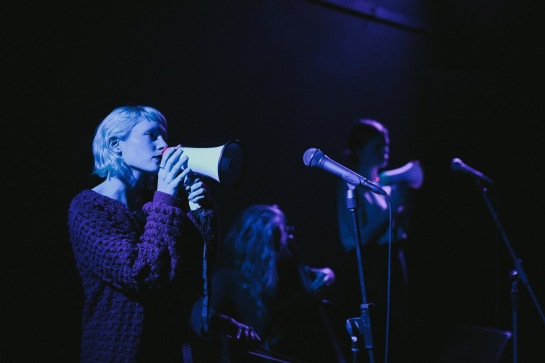 I’m still a baby actor so it was an invaluable skills challenge to hit the one scene seven nights in a row. My character, Man, makes a kind of challenging turn from charismatic to awful. I was blessed to have my great friend (and gun actor) Emma McManus as my scene partner and with her and Cathy’s support I felt like the run was really selling by the end of the run. Close friends have assured me that I was suitably hateable.

The run sold out and was well-reviewed, if I were you I’d keep up with every COUP move right here.

Somewhere after our huge 2012 stage musical blowout The Last Prom, myself and the other guys from PROM decided that the most subversive move we could make was to become a straight-up rock band. It’s four years later and we’ve had a great time in the arcane world of ‘venues’, ‘support acts’ and ‘load-in times’, but we’ve decided that it would now be fun to go back to our theatre-y cabaret-y full-costumed roots.

The obvious way to draw a line under our Normal Band Phase was to release an actual record, which we did live on stage at The Phoenix the other night. We made it a triple-record launch alongside a couple of awesome acts from Sydney (Imperial Broads and Richard Cuthbert). Weirdly, or perhaps inevitably, it was the best gig we’ve ever played.

It was Julia’s idea to release on cassette, and while I default to be militantly anti-physical-media I knew that JJ could be relied on to make something that looked really fucking cool, which is a thing I certainly care about. Truth be told, when I finally borrowed my girlfriend’s 90s-vintage Walkman and had a listen it was pretty wonderful to wallow in everything I’d long forgotten about the format (like being able to hear the ghost of Side B when you get to the end of Side A).

It could definitely be argued that cassette  is the ultimate medium for these particular songs, a batch that includes ‘No-One Can Hear My Love’, the track that Luke described as my most melodramatic yet. He of all people knows what he’s saying when he says that.