Babyfreeze were thrilled to help our friend Andrew Galan launch his newly-published book of poetry, That Place Of Infested Roads, at the Phoenix the other night, along with a cadre of local poets and the fabulous Bacon Cakes.

It was our intention to troll the event as much as possible, which we did by dressing as obnoxious poet stereotypes and inserting as many bad haikus and acrostics in between our songs as possible. Some samples:

I rock a party

Life’s the Best, I’m the greatest

But perhaps she is bigger

Than dry land can know

We also debuted a new, long, slow and cripplingly sad song with no title that I’m pretty keen to shoot a video for soon. Most of all it was great to share a gig stage with Luke again after being so busy with other projects lately. 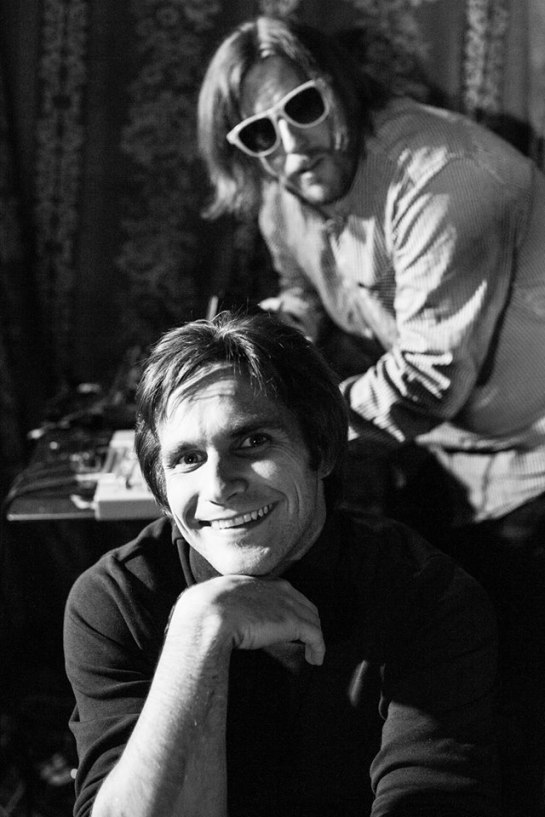 Photos by Adam, ‘The MC’ Thomas.

We had always intended our first gig to be at The Phoenix  – however, when we got a last minute offer to play at The Basement, we leapt on it.

We treated The Basement show as a soft opening, a chance to blast the songs out of a massive P.A. and take some pressure off our ‘official’ debut.  An unexpected bonus was that The Basement’s warrior-soundman Kurt Neist recorded the whole set.  The sound is big and clear, but the video is amazing – Kurt has three old-school video cameras trained on the stage automatically scrolling.  The footage is full of glorious fuzz and tracking issues – the kind of on-trend look I might have given it anyway (the fact it’s all in-camera is even better).  We look like we’re playing on 80s public access television.  I love it, and want to return to film a music video.

Monday at The Phoenix was pretty special.  I’ve seen Paul Heslin play a few shows now, but this was my favourite so far.  He had three TVs patched into his set-up blinking on and off, warping with static in time with the music.  Space Party (with whom we share Kevin) played next – this was when I got really nervous.  It’s bad enough they’re all brilliant musicians, but they have such taste (their cover of I Had Too Much To Dream Last Night slays).  They’re a hard act to follow, but follow them we did.

After testing it in rehearsal on Friday, this was the first time we integrated our video rig.  Connected via USB to a switch beneath Chris’ kick drum pedal, and running a bespoke program written by Paul Heslin, every bass hit triggered an edit, bouncing through an eclectic selection – 60s Batman, Godard films, Equinox, Bill Plympton cartoons, Youtube videos of cats with laser eyes, Stan Brakhage shorts and more (there was even some frames of us).  We switched off the stage lights and projected the footage on the wall behind us – the patterned backdrop made it hard to see (next time we’ll go all out and bring a white sheet), but it gave the set its own lo-fi, arty flavour.  LocalNLive were kind enough to film us (thanks Sam and Adam!), and Reuben Ingall recorded the sound .

Our set was sweaty, loud, and fast (nine songs in 30 minutes).  Raggedy in parts, but the audience was incredibly supportive.  I’ve been playing in bands for over 10 years now, but every new set/group still feels like beginning again – this band has forced me to step up as a singer and guitarist, and I’m excited about its future.

I also handed out our zine Dead Medium – I forgot to mention it while on stage, so we’ve got some left over for the next gig.  I’m crap at predictions, but I feel that kind of engagement with bands is due to make a comeback – I’m even getting some badges made up!

I was sitting in the bath, I think it was the day after You Are Here, exhausted in body and mind. My phone pinged with an e-mail (yes I have my phone with me in the bath). Dave Finnegan was looking for artists to join him in Manila in August, to work with the Sipat Lawin ensemble, creators of the internationally controversial Battalia Royale (alongside Dave himself and the Too Many Weapons crew- learn more here- http://www.au.timeout.com/melbourne/theatre/features/2932/david-finnigan-on-kids-killing-kids) I said for sure. I figured it was the sort of thing that probably wouldn’t actually happen.

Around four-and-a-half months later, I was standing in a pool in the middle of Quezon city watching a parade of actors, poets, dancers, fire-twirlers and actor-poet-dancer-fire-twirlers assay the concept of love in a myriad of ways both ingenious and chaotic. I was part of the show, and also part of the crowd, because with Sipat Lawin the line tends to get blurred. I should try and explain.

Dave invited about 20 of us on the trip, hoping that a few of us would say yes. 19 of us did. Sipat Lawin (it translates roughly to ‘bird’s eye view’), an independent experimental theater company that operates in make-shift spaces on threadbare resources, were politely informed that they would be hosting 19 Australian guests who were all keen to collaborate in their new show. 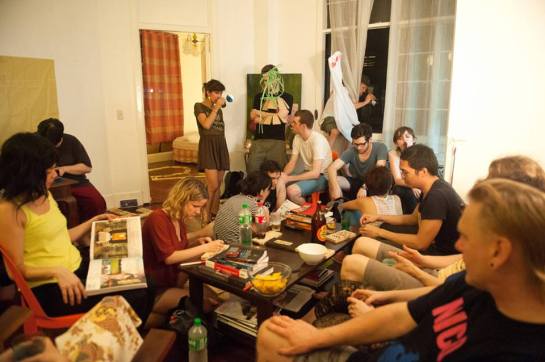 I can’t speak for the others White Legs, but I hit the ground with no idea what was going on or what I was doing. Our first couple of days involved acting as a test audience for what already existed of LoveNOT (the show in question), as well as a special Mass Wedding event for which we were required to choose spouses and write vows. I tied the knot with our videographer Shane, under the auspice of Sipat company director JK Anicoche, who was ordained by an internet ministry days before.

After that I my friends NickMc and Sarah and I were put into a group with some of the company members and tasked to devise some pieces and performances for the show. I am NOT a devised theater guy. I was utterly out of my depth. LoveNOT was organised around an entirely original cosmology of god characters which was both fascinating and daunting (My group was in charge of the Memory god). For the first couple days I wasn’t sure that I would be able to add anything. I roped NickMc in and we wrote a song, just in case a song turned out to be useful. 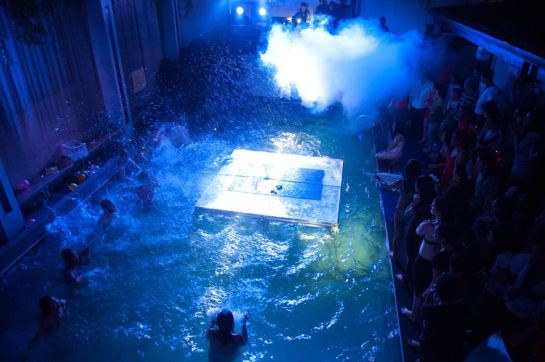 Meanwhile, 19 Australians were crashing across three houses (I was at JK’s house) and dealing with the intensity of the situation the way that the You Are Here family always does: with a series of escalating creative dares. Dave wrote a radio play on the subject of Jess’s fraught encounters with Yuki, the highly-strung dog that lives at JK’s house, and next we knew there was a competitive table of radio play-offs being cast and recorded at Seattle’s Best Coffee and judged over dinner meals of Adobo and Yellow Cab Pizza. Something like eleven got made over the 10 days we were there, one of them was mine. Jordan and Sam (two of the Battalia Royale writers) challenged us all to be part of the Rizal Fountain Raps, a web series which involves some kind of solo performance to camera in an odd location. I did a performance poem, for the first time in my life, and it was hard to memorize. The guys busted me practicing it in the middle of a nightclub dance-floor at one stage. 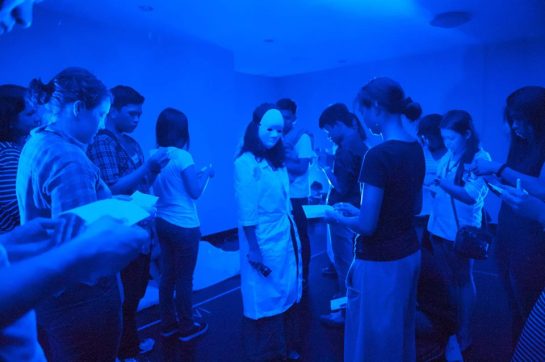 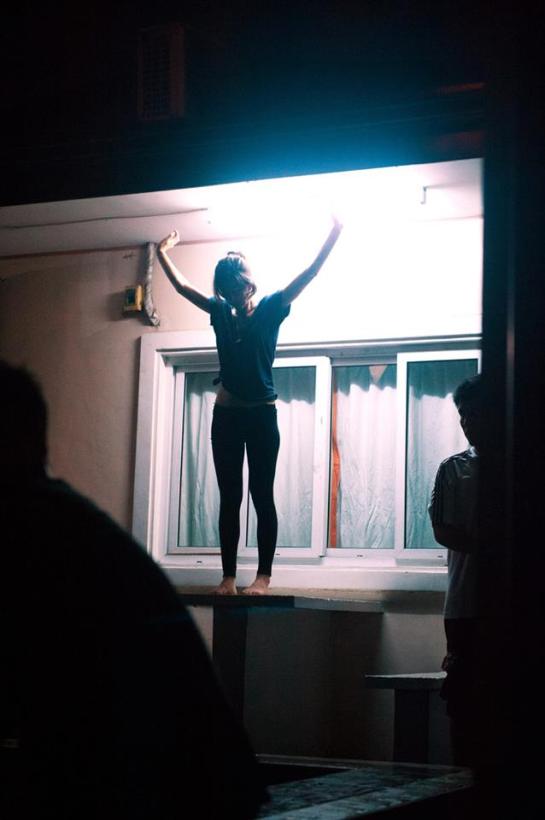 Of most relevance to regular Lick-Nuke readers, I roped in Shane and a bunch of the others to shoot a Manila-set epilogue to Heartbroken Assassin. I was inspired by the recent Wolverine film, which leaned hard into the protagonist-exiles-himself-to-a-foreign-country-and-grows-a-pain-beard trope. I grew what face-hair I could in the allotted time, and we roped in a local dancer/actor named Josh to beat me mercilessly in the street. 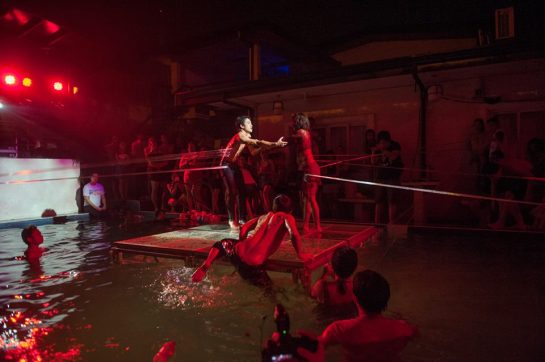 Anyway, the Sipat Show. Myself and Claudia from Sipat (Hi Claud!) ultimately came up with a modest but I think kind-of-cute little bit in which we played a mother and son. It was performed as one piece among many in a literal labyrinth of performance installations that were used to group the sizable crowd into their God Groups. After the God Groups, the audience were invited into the pool (a late addition to the show, which had to be worked in when the initial location for LoveNOT was flooded during the typhoon. Did I mention there was a typhoon? There was).

Central to Sipat’s practice is a level of audience engagement and interaction that clashes violently with Australian notions of comfort, consent and even safety. Attendees were made to enact nearly as many narrative moments as the actors, were frequently put into the role of Lover and were made to interact with their fellow audience in intimate, emotionally raw ways. There was a lot of chaos in their structure, but the moments it led to were some of the most undeniably potent I’ve seen from any live performance of any type.

Speaking of, the song that NickMc and I wrote ended up becoming the official anthem for LoveNOT and we performed it live at the end of the show. At four minutes long it was one of the funnest shows I’ve ever played. The song is called New Love Universe and I’ll post it to the blog soon.

The full title of the show was LoveNOT: This Is Not Yet A Musical. Just as it sounds, the idea was to precursor a musical titled Love. I’ve been not-so-subtle in attempts to audition as a songwriter for the work, and it looks like this collab might be just the first of many. I’ll post some of the things that we made over there as they’re edited and completed. This thing was a little to big to sum up in one post.

Photos by the Spectacular Sarah Walker, including this one of my Far East Husband Shane. 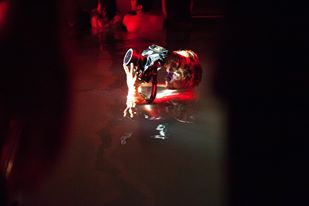