Babyfreeze launched their new EP Sometimes Leather back in November. 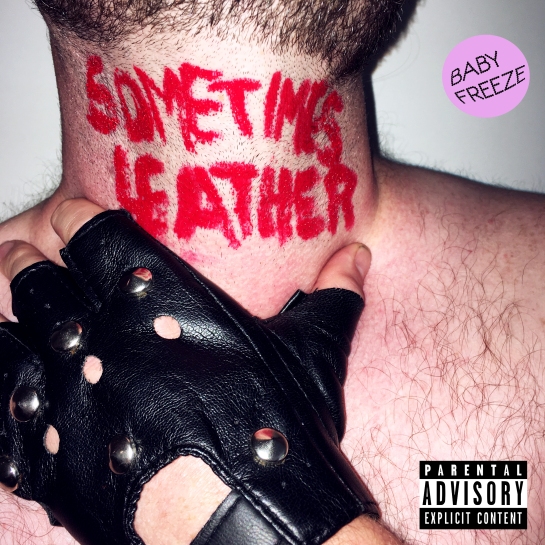 Set to play at LoBrow, the venue sadly closed a week before our launch! After scrambling to find another venue, I had a ‘eureka!’ moment – what if we put on the gig ourselves, guerrilla-style? I’ve always wanted to do a guerrilla show like Hashemoto and The Cashews, and this seemed like a perfect opportunity. We hired a generator, I brought my PA and the gig went ahead at Commonwealth Park amphitheatre (previously the location for this amazing video).

To be honest, I thought we might run into more issues, but the entire night went smoothly, both the acts and the audience galvanised by the clandestine novelty (I counted fifty punters). Listening to devdsp as the sun set over the lake was one of my musical highlights of the year.

Typically this is the point in the blog post where we’d breakdown the making of the EP, but that got its own one page splash in BMA! 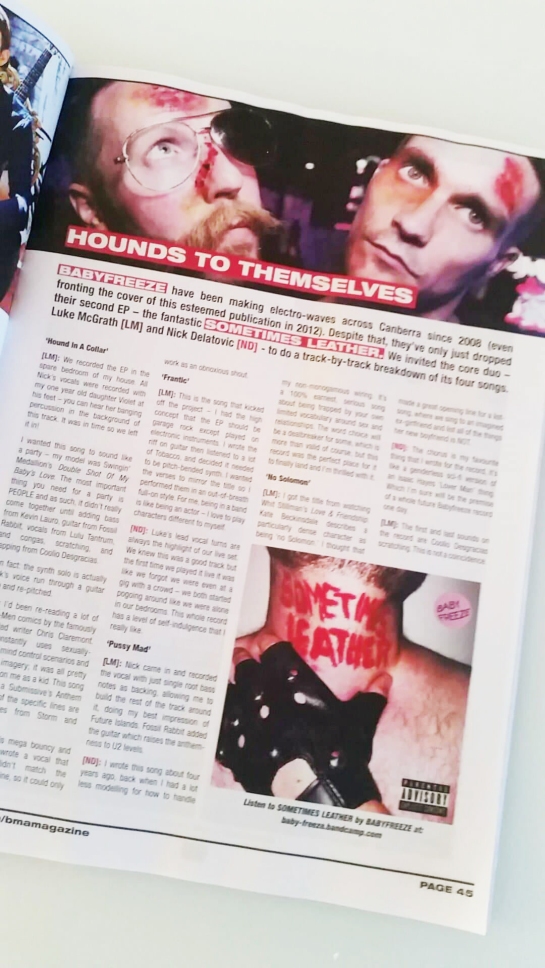 BABYFREEZE have been making electro-waves across Canberra since 2008 (even fronting the cover of this esteemed publication in 2012). Despite that, they’ve only just dropped their second EP – the fantastic Sometimes Leather. We invited the core duo – Luke McGrath (L) and Nick Delatovic (N) – to do a track-by-track breakdown of its four songs.

Hound In A Collar

LM: We recorded the EP in the spare bedroom of my house. All Nick’s vocals were recorded with my one year old daughter Violet at his feet – you can hear her banging percussion in the background of this track. It was in time so we left it in!

I wanted this song to sound like a party – my model was Swingin’ Medallion’s Double Shot Of My Baby’s Love. The most important thing you need for a party is PEOPLE and as such, it didn’t really come together until adding bass from Kevin Lauro, guitar from Fossil Rabbit, vocals from Lulu Tantrum, and congas, scratching, and rapping from Coolio Desgracias.

Fun fact: the synth solo is actually Nick’s voice run through a guitar amp and re-pitched.

ND: I’d been re-reading a lot of 80s X-Men comics by the famously perverted writer Chris Claremont. He constantly uses sexually-charged mind control scenarios and sub/dom imagery; it was all pretty formative on me as a kid. This song ended up a Submissive’s Anthem but a few of the specific lines are direct quotes from Storm and Wolverine.

Luke’s track is mega bouncy and friendly so I wrote a vocal that deliberately didn’t match the chords or bass line, so it could only work as an obnoxious shout.

LM: This is the song that kicked off the project – I had the high concept that the EP should be garage rock except played on electronic instruments. I wrote the riff on guitar then listened to a lot of Tobacco, and decided it needed to be pitch-bent synth. I wanted the verses to mirror the title so performed them in an out-of-breath full-on style. For me, being in a band is like being an actor – I love to play characters different to myself.

ND: Luke’s lead vocal turns are always the highlight of our live set. We knew this was a good track but the first time we played it live it was like we forgot we were even at a gig with a crowd – we both started pogoing around like we were alone in our bedrooms. This whole record has a level of self-indulgence that I really like.

LM: Nick came in and recorded the vocal with just single root bass notes as backing, allowing me to build the rest of the track around it, doing my best impression of Future Islands. Fossil Rabbit added the guitar which raises the anthem-ness to U2 levels.

ND: I wrote this song about four years ago, back when I had a lot less modelling for how to handle my non-monogamous wiring. It’s a 100% earnest, serious song about being trapped by your own limited vocabulary around sex and relationships. The word choice will be a dealbreaker for some, which is more than valid of course, but this record was the perfect place for it to finally land and I’m thrilled with it.

LM: I got the title from watching Whit Stillman’s Love & Friendship. Kate Beckinsdale describes a particularly dense character as being ‘no Solomon’. I thought that made a great opening line for a list-song, where we sing to an imagined ex-girlfriend and list all of the things her new boyfriend is NOT.

ND: The chorus is my favourite thing that I wrote for the record, it’s like a genderless sci-fi version of an Isaac Hayes ‘Lover Man’ thing. Which I’m sure will be the premise of a whole future Babyfreeze record one day.

LM: The first and last sounds on the record are Coolio Desgracias scratching. This is not a coincidence.

To cap off a bumper year for Babyfreeze, Hound In A Collar was recently named ‘party track of the year’ in 2XX Local’n’Live’s top 20 songs of the year!

2018 is set to be even bigger – Nick and I are currently working on several Babyfreeze projects, including a Dead DJ Joke helmed EP, a Coolio Desgracias collaboration, and our first full length album, Disco Room.