Babyfreeze were thrilled to help our friend Andrew Galan launch his newly-published book of poetry, That Place Of Infested Roads, at the Phoenix the other night, along with a cadre of local poets and the fabulous Bacon Cakes. 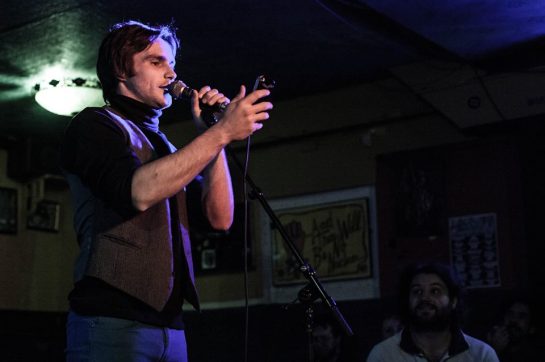 It was our intention to troll the event as much as possible, which we did by dressing as obnoxious poet stereotypes and inserting as many bad haikus and acrostics in between our songs as possible. Some samples:

I rock a party

Life’s the Best, I’m the greatest

But perhaps she is bigger

Than dry land can know

We also debuted a new, long, slow and cripplingly sad song with no title that I’m pretty keen to shoot a video for soon. Most of all it was great to share a gig stage with Luke again after being so busy with other projects lately.

Photos by Adam, ‘The MC’ Thomas.