We had always intended our first gig to be at The Phoenix  – however, when we got a last minute offer to play at The Basement, we leapt on it.

We treated The Basement show as a soft opening, a chance to blast the songs out of a massive P.A. and take some pressure off our ‘official’ debut.  An unexpected bonus was that The Basement’s warrior-soundman Kurt Neist recorded the whole set.  The sound is big and clear, but the video is amazing – Kurt has three old-school video cameras trained on the stage automatically scrolling.  The footage is full of glorious fuzz and tracking issues – the kind of on-trend look I might have given it anyway (the fact it’s all in-camera is even better).  We look like we’re playing on 80s public access television.  I love it, and want to return to film a music video.

Monday at The Phoenix was pretty special.  I’ve seen Paul Heslin play a few shows now, but this was my favourite so far.  He had three TVs patched into his set-up blinking on and off, warping with static in time with the music.  Space Party (with whom we share Kevin) played next – this was when I got really nervous.  It’s bad enough they’re all brilliant musicians, but they have such taste (their cover of I Had Too Much To Dream Last Night slays).  They’re a hard act to follow, but follow them we did. 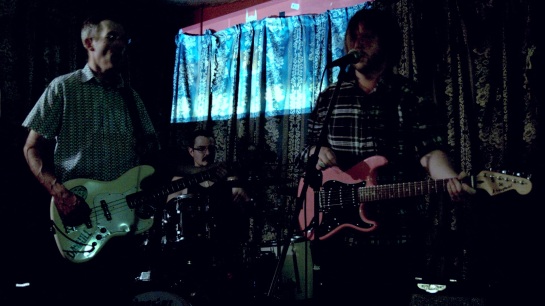 After testing it in rehearsal on Friday, this was the first time we integrated our video rig.  Connected via USB to a switch beneath Chris’ kick drum pedal, and running a bespoke program written by Paul Heslin, every bass hit triggered an edit, bouncing through an eclectic selection – 60s Batman, Godard films, Equinox, Bill Plympton cartoons, Youtube videos of cats with laser eyes, Stan Brakhage shorts and more (there was even some frames of us).  We switched off the stage lights and projected the footage on the wall behind us – the patterned backdrop made it hard to see (next time we’ll go all out and bring a white sheet), but it gave the set its own lo-fi, arty flavour.  LocalNLive were kind enough to film us (thanks Sam and Adam!), and Reuben Ingall recorded the sound .

Our set was sweaty, loud, and fast (nine songs in 30 minutes).  Raggedy in parts, but the audience was incredibly supportive.  I’ve been playing in bands for over 10 years now, but every new set/group still feels like beginning again – this band has forced me to step up as a singer and guitarist, and I’m excited about its future.

I also handed out our zine Dead Medium – I forgot to mention it while on stage, so we’ve got some left over for the next gig.  I’m crap at predictions, but I feel that kind of engagement with bands is due to make a comeback – I’m even getting some badges made up!