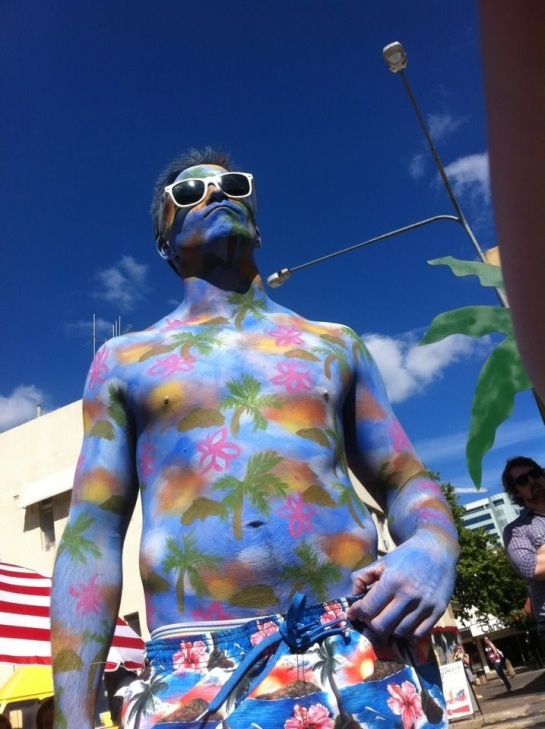 Remember when I said in my last post that the success of You Are Here had emboldened me to push my artistic practice further than ever before? Well, the above photo demonstrates the ridiculous consequences that have since been unleashed.

I’ve covered my bodypaint exploits in detail in a previous post, but it’s worth noting that the above job was the result of about 90 minutes of tireless effort by You Are Here visual-artist-in-residence George Edwards and our operations manager Karmin Cooper. The paint job was my cockamamie way of contributing to The Beach, a day festival in which we made over the rather scum-tacular Tocumwal Lane into a fully-blown faux beach party. 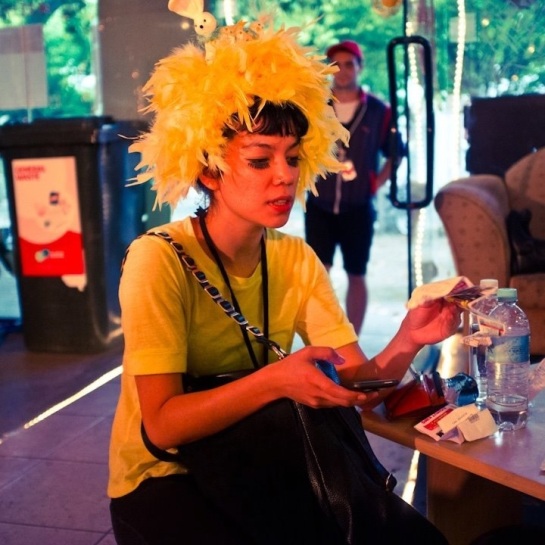 After basically sandbagging my way into the first You Are Here, I was fortunate enough to be invited back as a festival co-ordinator for the second one. Reuniting with my fellow co-ordinators (such as the inimitable Sarah Kaur, pictured above) felt a lot like returning to some kind of awesome summer camp, or a new school term at Hogwarts.

Apart from all the runny-roundy supervisory duties, I was again tapped for a bunch of performance and writing roles. These included:

The You Are Here Music Quiz, in which I insulted the hard-core quiz night culture of the Phoenix bar with such concepts as The Iron Man Challenge (in which different musicians competed to see who could teach a drunken punter the riff to Black Sabbath’s Iron Man the quickest).

The B-Ball Band Bash, in which four of Canberra’s most semi-athletic bands competed in round robin four-a-side basketball to decide the running order of their gig (I acted as one half of the commentary team alongside Naomi ‘Mad Milthorpe’ Milthorpe).

Easily my most ridiculous/greatest achievement was the Ghost EncounTour, in which I took a small group through the spectral hotbed of the Centerpoint building and performed a short exorcism. The EncounTour wasn’t even part of the program, it literally grew out a jokey conversation between David and I on day 2 of the festival and escalated almost as a creative game of Chicken that I don’t think Dave realised we were playing. The whole thing was heavily improvised in the moment but seemed to make a heady impression on several of the attendees (I’ll see if I can work out how to imbed the video in this post ).

Of course, focusing on my events undersells the ever-increasing scope of the festival, which took in an even bigger range of visual art, theatre and dance than the previous year. Our crowd numbers increased steadily across the ten days and before we’d finished You Are Here 2012 we were already deep in brainstorm mode for this year.
Scant moments after I had wistfully put my lanyard in the drawer, the guy approached me about graduating my role for 2013 from co-ordinator to producer. I like to think I kept an inscrutable poker face as I said yes, but the truth is that this festival is the most worthwhile creative project I’ve ever been involved in, so the more I can do to push it on and up the better.

Which leads to my current, comically over-committed state! Next post: You Are Here 2013! 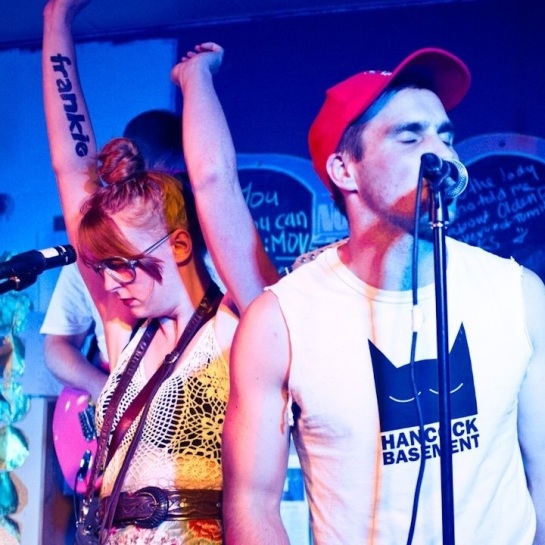