After the frenetic pace of the WAR promo (and the anarchic nature of One Pot Punk Rock), it was bliss to work on something languid and deliberate.  I had the idea for this scene, then Nick and I went back and forth on the script.  It’s only three shots, but I’m pleased with all the nuances, both in the editing and the camerawork: 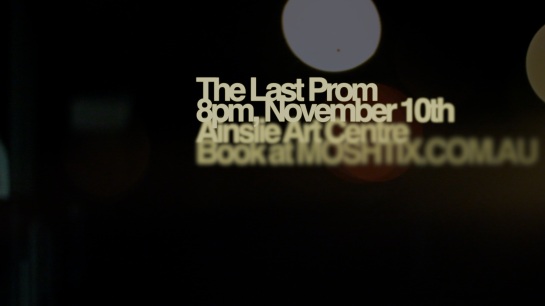 I also had fun with the text – finding the right shade of honeyed moon, and bunching it together for a bespoke look.  Just little things, but that’s all filmmaking consists of – tiny, constant decisions building towards a whole.  I love how every shoot teaches you something for the next as well – filming live music in a car gave me a couple of tricks for getting decent sound in imperfect locations.

If I could make another 89 minutes just like this, I’d have a hell of a feature.

Tickets for the show are available now at MOSHTIX.COM.AU