I describe Chenoeh Miller’s Sound and Fury parties as the sort of parties that a classic Bond Villain would throw. Lurid colours, pockets of performance firing off in every corner of the space, in and around the crowd, and an abiding sense that you’ve stumbled into a scene from some larger, life-and-death sequence in the lives of the performers.

I’ve been performing in the Sound and Fury Ensemble for I guess three years now. For me it’s a mix of out-of-the-comfort-zone (being part of full-blown production-number dance items alongside a group of actual highly-trained dancers) and fantasy self-indulgence (straight up pop ballad singing in an array of garish outfits). Chen and the rest of the ensemble are among my favourite people I’ve ever worked with, and the busyness of all our lives means that the normally once-a-quarter instances of Sound and Fury tend to rush by in a blitz of last minute rehearsals and frantically-rigged sound cues.

That was until a few weeks ago, when S@F did more nights of performance in the space of a week than we normally do in a year. Five nights at New Zealand Fringe, comprising four 3-hour parties and one 5-hour party. My first tour as a performer in an ensemble rather than as a performer/writer/Producer and yes it was straight up my fantasy of Performance Art Sleep-Away Camp come true. 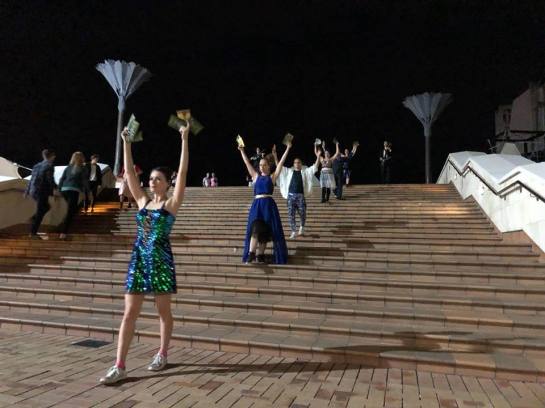 I got to sing some of my favourite ever weepie anthems- Nothing Compares To You, It’s A Heartache, Heart-Shaped Box- and leap around like a madman to our resident DJ/best DJ living Dead DJ Joke. I got to have my first experience of roving performance/space filling performance that I could actually enjoy (it’s not my skill set but being part of the shock and awe factor of a 10-person ensemble is defs the way to do it). Most of all I got to indulge my love doing of Long, Extended, Physical performances. Like seriously, doing physically challenging stuff for ages in front of an audience is so my thing. So so my thing.