I started this website to document ‘process’, but my efforts have been slipshod this year. It’s partly that I’ve been doing a bit less (certainly less directing), partly that many projects are stretching out over many months (such as the pending Faux Faux Amis album; I mostly write following a project’s completion – maybe I need to write more during), and partly the reduced time available to a new father.

But sometimes I just plain forget to write about something. To be honest, I thought this video might never be released – Lou and I filmed it on 17 January 2016, and it didn’t drop until 16 months later, on 18 May 2017. Looking at those dates, perhaps it’s oddly fitting I’m writing about it five months later.

Emma approached me with the concept – the band performing while a forest is painted behind them, before the band is covered in orange paint. I took that concept away and fleshed out a treatment, including the idea of the band ‘disappearing’ into the painting by the end, and filming in an actual forest.

We were fortunate to film at Gorman Art Centre – their kitchen, in fact – and just down the hall from Tara Bromham’s studio (who alongside Pocket Fox’s Nicola Menser Hearn was responsible for the amazing painting). Emma and Luci are both great on camera and alongside the steady stream of extras that rocked up (everyone’s favourite being Ted Conrick’s talented dog), the one-day shoot was a breeze. I need to single out the catering provided by the band – Turkish pizza in a range of vegetarian options – which has set the bar hopelessly high for all subsequent shoots.

Despite the many hats Lou wears on a film shoot – from gear wrangler to producer to camera operator to impromptu extra – she often laments she feels like a third-wheel on set. I imagine getting to fling orange-dyed yoghurt at the talent was both a rewarding and cathartic experience – only bettered if she could have thrown it at me as well (I read this sentence to her and she said, ‘that was my favourite shoot ever’).

I think we really stepped up our colour palette game on this one – the strong orange and white, against the browns and greens of both the forest and the painting – even the pre-painted canvas is a perfect shade of wholemeal. It’s remarkably consistent and allows the other small bursts of colour to really pop.

The merging of real and ‘created’ spaces, the crossing over of real and fictional worlds – such as the band disappearing into the painting, and slowly having the ‘worlds’ bleed together, like when the band’s instruments are replaced by branches and acorns – is a (sometimes unconscious) preoccupation of mine.

I’ve written about this kind of thing before, but just realised I’ve also employed a similar conceit in an upcoming video for Oz-rock royalty The Ups & Downs. In that video, a group of dancers and the band similarly merge piece-by-piece into a cohesive unit, the whole scenario revealed to be warring factions inside the lead singer’s mind. Why I enjoy playing in this realm so much is a question for another time. 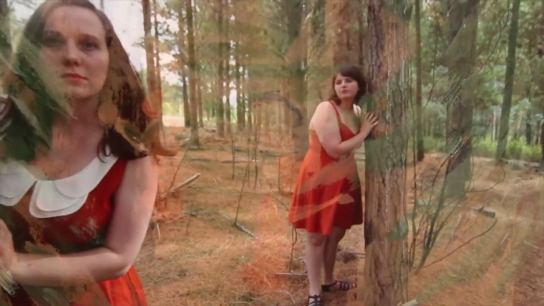 This is the second video I’ve done with Luci – we also filmed a video for Pocket Fox’s Cigarette, which is yet to be released. That video is my favourite film clip I’ve shot so far and vastly different in style to anything else I’ve done – hopefully I can write more about it soon!