Nick’s screenplay Lights recently won the short:seasons competition.  The competition called for short film scripts themed around Canberra and autumn.  The winner is given a month to shoot the film so it can be screened at the NFSA as part of the inaugural short:seasons film festival.  We filmed the bulk of Lights over the weekend. 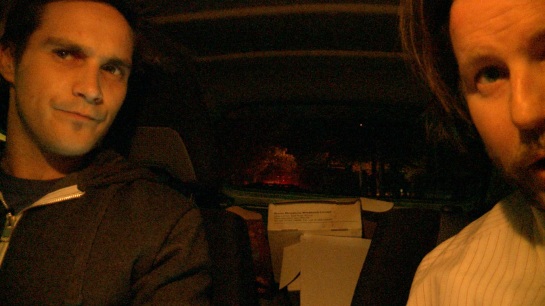 Our intention was to use the project to trial new equipment and gather experience on aspects of filmmaking we hadn’t encountered yet (such as running a casting call and auditions).  Sound recording (the weakest aspect of Heartbroken Assassin) was one area I wanted to improve – to that end, we recorded the actors using wireless lavalier mics into a digital recorder (manned by sound artist Paul Heslin).  This significantly upped our production values, and gives me greater control when mixing in post-production.  I’ve already tested how compression and EQ’ing can enhance and augment the raw recordings and I’m loving the difference.

While we had some access to additional film equipment via ScreenACT, we chose to film with my DSLR (if it’s good enough for Ed Burns…).  I was underwhelmed with the test footage we shot with a Sony EX1r – my DSLR appeared to outperform it in the dusk/night shots that comprise a large portion of the film.  While a dedicated video camera has a lot to recommend it, I think that at our level, they are of greater benefit to documentarians than narrative filmmakers – autofocus, zoom, balanced mic inputs (we recorded sound separately), and stabilisation (we mostly use a tripod) are all redundant or inessential.  My one concern is that DSLR footage, once blown-up to appear on a cinema screen, will be grainier and less detailed than if it was shot on the EX1r.  That’s something we’ll have to discover on the night – if it turns out to be the case, it will be unfortunate, but a good lesson to have learned on this project.  My motto, after Samuel Beckett, is to fail a little bit better each time.

The time constraints meant we were unable to do a casting call and run auditions (something we’ll do for The Real).  As a development opportunity, this was a shame – as it pertains to Lights specifically, it didn’t affect the film.  In fact, we lucked out with the actors – Nick knew our lead Cara Irvine through a couple of confluences (Broken Hill, housemates) and we sat down and discussed our intentions with her early.  Ben Drysdale and Julia Johnson, both actor friends we’ve known for years, joined shortly afterwards.

Working with actors is something I’ve been thinking a lot about recently.  Prior to this year, my experience was dated – assessment pieces (as a director) and productions (as an actor) while obtaining my Bachelor of Arts in Theatre Studies.  Returning to it, I’m still trying to discover what works best.  I admire directors like Wong Kar-Wai and Mike Leigh, who begin a project with only actors and ideas, and then build the story together.  This approach requires more lead time than I have had for anything to date, nor do I believe it is suited to every project, but it’s certainly appealing.  I like to give actors a lot of freedom, for a couple of reasons.  Being Director doesn’t mean I magically have all the best ideas – making films is a collaboration, and actors will have thought about the character and the role in different ways to myself.  Before imposing my views, I want to see what they’ll bring to it – being overbearing doesn’t produce better work. Secondly, I’m still building a vocabulary to engage with actors – at the moment, when something’s not working, I find it hard to articulate it in a way that makes the next take better (and sometimes I think I’ve made it worse).  It’s a bit like the chestnut about art – I don’t know what it is, but I know what I like.

I don’t know how to coax a good performance from a bad actor (and by “bad” actor, I don’t mean those that make choices that would be different to mine or what I feel the scene is about, but those that no matter their choice are still too far on either end of the spectrum – too stilted or too hammy).  The main issue, as above, is time.  It’s too late once you are on set – the work needs to be done earlier – either in casting, or in rehearsals.  I’m sure there are directors that can (and have) worked miracles, but I find I can only influence performance by a few degrees.  Experience and exposure will help in this regard, but the better solution is just to work with good actors.

Most actors I’ve encountered are serious about their craft and are brilliant collaborators.  I then have the reverse problem – I fall for everything they do.  They make dialogue I think will be a tough sell sound completely convincing.  I want to keep every inflection of every line reading.  This was the case with the actors on Lights – rather than settling on a delivery, I was amazed how often they were reacting in the moment, and how nuanced each exchange could be – the pitfall then is wanting to do take after take, not because we haven’t got a workable one, but because I want to see what else is possible.  When working with good actors, I try to get out of the way, and allow them to find the scene.  My direction is limited to blocking and pacing – I read recently that Damon Lindelof said directing is mostly about telling actors “faster, faster!”, and I found myself doing this a couple of times over the weekend.

There are no hard and fast rules for any of this, and everyone has their own way they like to work (like penguins, when directors and actors find their styles compatible, they often partner for life, or at least several films)  – what I want to do is skill up to be able to deal with the widest range of acting styles and temperaments.

By increments, our shoots are getting more elaborate.  On Heartbroken Assassin, I could operate and keep track of everything myself.  Going forward, with a view to increased production values, this is not possible.  It’s not even a case of having enough hands, it’s not having enough headspace.  It becomes hard to give appropriate and equal consideration to every aspect – when you’re focusing on the framing and panning, you’re not evaluating the acting.  When you focus on the acting, you’re not critically considering the lighting.  You concentrate on the lighting, and you drop the ball on continuity.  And so on.  Nicholas Winding Refn recently said a director has to be a jack of trades, that he/she needs to know a little – but not everything – about all aspects of film-making, from cinematography, to sound, working with actors, pitching to producers, budgets, writing, editing, and everything in between.  There are areas I am more confident with than others, but there is so much to learn and put into practice.  It also means finding the right collaborators to share the load.

I’m still not sure what kind of director I want to be, but it’s taking shape without my realising it.  Winding Refn said in the same interview he films his movies in chronological order – that sounds absurdly extravagant to me.   However, during a table read Nick made it known to our actors that when filming any camera angle, I like to run the entire scene, even if only a small percentage of that angle will make it onscreen.  I hadn’t realised I was doing this, or rather, I hadn’t realised this might set me apart in any way.  I have my reasons for working like this – the two largest being I think it helps the actors be as natural as possible each time, and that it provides me with the most options when editing (being my own editor is perhaps the greatest influence on my directorial style so far).  I’d love to say it was a throwback to my theatre days or in emulation of Ozu or something, but I’d be lying.  I think your style evolves between what you consciously do, and what subconsciously feels right.

Apologies for rambling – more of a ‘process’ post than usual – I’ll have more to say about the actual film once we have a first cut.